Japan Crown Prince: Masako's health is improving but not enough

Japanese Crown Prince Naruhito said Friday his wife Masako's health is improving but not enough to join him on an official trip to Mexico next week. 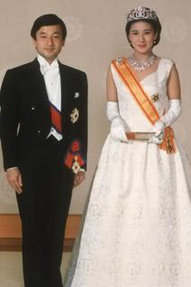 Japan Crown Prince: Masako's health is improving but not enough

Harvard-Oxford educated former diplomat, Masako has been receiving counseling and medication for stress-induced depression since she retreated from official duties in late 2003.

"Masako is recovering steadily but slowly," Naruhito, 46, told a news conference at his Togu palace ahead of his scheduled trip next week to Mexico, where he will deliver a speech at an international water summit. "But she is not well enough to perform overseas official duties that involve a long trip."

Naruhito said his 43-year-old wife has taken private outings more often and accompanied him on some official duties recently under her doctor's recommendation. She is also enjoying preparing for their 4-year-old daughter Aiko's enrollment in the kindergarten next month, he added.

"I truly hope there will be an opportunity to visit a foreign country with Masako as soon as possible," the Crown Prince said.

The Mexico visit would be his second solo overseas tour since a May 2004 trip to Europe. In a news conference before that trip, Naruhito sparked controversy by accusing unidentified palace officials of "denying her character."

Naruhito said staffers at the Togu palace, where the couple lives with their daughter, have provided support and understanding to improve the environment surrounding Masako.

"I appreciate further understanding and cooperation," he said.

Masako has also suffered tremendous pressure to produce a boy as Japan's royal family faces serious succession crisis. No male has been born to the family since Naruhito's younger brother, Prince Akishino, was born in 1965, reports the AP.