The Russian government sought Friday to shut down a popular, independent news Web site in Siberia for publishing extremist views of an anonymous reader who insulted Islam. The court case that opened against the Bankfax.ru site in the city of Barnaul on Friday and a parallel warning to the country's leading online news agency, Gazeta.ru, heightened concerns about dwindling media freedom in Russia. 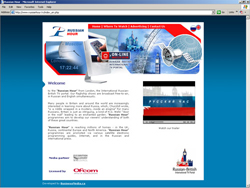 The government agency responsible for media, Rosokhrankultura, acted after the Bankfax site published a violently anti-Muslim comment from an anonymous reader known as "Bratka" last month on a forum discussing the controversy over the publication of the Prophet Muhammad cartoons. A spokesman for the body, Yevgeny Strelchik, said that the news site had distributed extremist views and should therefore face closure.

"They published the opinion of a person who incited religious hatred," he said. Rosokhrankultura also on Thursday warned Gazeta.ru over its decision to post on its site caricatures of the Prophet Muhammad that were first published in a Danish newspaper last September and inflamed violent Muslim protests when European and other newspapers reprinted them this year.

The editor of Gazeta.ru, Mikhail Mikhailin, insisted, however, that the site was justified in covering an important news story. "The aim of the publication and the illustrations was to cover the hugely important social issue of the anti-Danish protests in the Muslim world," he said in comments posted on the site.

The prosecutor's office in the Siberian region of Altai, where Barnaul is located, said that Bankfax had deleted the offensive comments a day after they were posted, only after prosecutors had complained. Prosecution spokesman Valery Ziyastinov said that a criminal case for inciting religious hatred had been opened and if found, the anonymous reader would face four years in prison.

The official denied that the news Web site was being targeted because of its independent editorial line. "They insist that this is about media freedom, but we cannot accept comments being publicly aired that contradict the law," he said. Bankfax.ru could not immediately be reached for comment.

However, Oleg Panfilov, head of the media freedom watchdog, the Center for Journalism in Extreme Situations, said that the news site had long irked the authorities and the extremist comment posted on its chat forum was a convenient excuse to target it.

"The decision to go after it was taken at a regional level but there is silent approval in Moscow ," said Panfilov. He added that the warning against Gazeta.ru also appeared to have political overtones. Last month, two Russian newspapers shut down after publishing drawings of the Prophet Muhammad. The editor of one of them faces an investigation on charges she used her position to incite hatred.

President Vladimir Putin has condemned publication of the cartoons, which were first printed in the Danish newspaper Jyllands-Posten, apparently out of concern that tension over them could destabilize Russia , which has about 20 million Muslim residents nearly 14 percent of the population. Since Putin came to power in 1999, all nationwide television channels have fallen into state hands and the independent media have shrunk to a single radio station with a national reach and still lively newspapers that are mainly published in Moscow and other big cities, reports the AP.