Polish lawmakers on Friday accused authorities in neighboring Belarus of violence and harassment against opposition candidates before the March 19 presidential election. Poland 's parliament adopted a resolution in which it "decidedly condemns the Belarusian authorities' brutal breaking of the laws of the Belarusian nation in its attempts to freely express its will in honest and free elections." 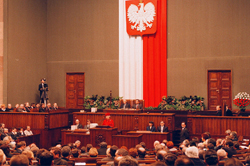 The resolution expressed "deep alarm" at cases of "violence, imprisonment, harassment and intimidation of presidential opposition candidates and democratic opposition activists and national minorities," though cited no examples. It called on Minsk "to respect democratic standards during the upcoming elections, especially free access to mass media for all candidates."

A Belarusian language radio, partly funded by the Polish government, began broadcasts into Belarus last month from northeastern Poland to provide an alternative source of information to voters. All Belarusian television and radio stations are loyal to authoritarian President Alexander Lukashenko and authorities have been cranking up the pressure on the few remaining independent newspapers.

Poland has long pushed for democratic change in Belarus , where Lukashenko has ruled since 1994. The United States and other Western countries have called Belarus Europe's "last dictatorship." The Polish parliament said it will "not cease in its efforts of supporting those representatives who undertake the fight for a free and democratic Belarus ", reports the AP.