Protesters planned to hold the second demonstration in two days on Friday to demand that Georgian President Mikhail Saakashvili's government step down. 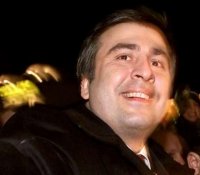 About 8,000 people had protested Thursday in the center of the capital, Tbilisi, many of them traders and small-business owners angered by new rules requiring them to use cash registers, a government move intended to cut down on tax evasion.

The protest reflected disillusionment with Saakashvili's rule following the high hopes for improvement in the economically troubled former Soviet republic at the time of his election two years ago.

There were scuffles as police pushed protesters off the street but no reports of serious violence during the rally. In contrast to Thursday's protest, however, authorities have not given permission for a demonstration to be held on Friday, possibly setting the stage for conflict.

Organizers have promised to bring even more people out on the streets Friday, reports the AP.