Indonesia , which has come under fire for doing too little too late to prevent the spread of bird flu, confirmed its 21st human fatality from the disease Friday, bringing the death toll in Asia to 90. Taiwan , meanwhile, protested a World Health Organization infections map that lumped the island in with its rival, China , officially identifying it as a place that has suffered human infections of the deadly H5N1 strain of the virus. 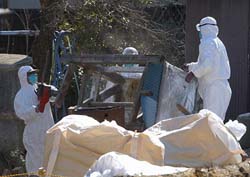 " Taiwan is not an area affected by bird flu and is certainly not part of the People's Republic of China ," Foreign Minister James Huang told lawmakers Friday. China announced its 10th fatality from the disease on Wednesday. Taiwan and China split amid civil war in 1949. China claims sovereignty over the self-ruled island, but concedes it does not administer it.

The death toll from H5N1 rose to 21 in Indonesia Friday after a WHO-approved laboratory confirmed that a 3-year-old boy died in Central Java province from the virus. The child, whose name was not released, died on Feb. 28 in the town of Semarang , apparently after coming into contact with infected chickens, said Hariadi Wibisono, a senior Indonesian Health Ministry official. A local laboratory had earlier confirmed the cause of death, but the WHO sent samples to Atlanta , Georgia , for confirmation. "We got the results back from Atlanta , and they were positive," Wibisono said.

An investigation was being carried out to find out how the child became infected. In Sri Lanka , poultry farmers launched a campaign Friday to encourage people to eat chicken, sales of which have fallen 20 percent since February when bird flu forced the culling of hundreds of thousands of birds in neighboring India .

There have been no cases of bird flu reported in Sri Lanka , which banned live bird imports nine months ago, according to D.D. Wanasinghe, head of the Poultry Farmers Association. H5N1 has killed or forced the culling of more than 140 million chickens and ducks across Asia since 2003, and has recently spread to Europe , Africa and the Middle East .

At least 96 people have died from the disease worldwide, two-thirds of them in Indonesia and Vietnam , according to WHO. Though health experts say the virus remains difficult for humans to catch, they fear it could mutate and set off a flu pandemic that could kill millions of people worldwide.

Indonesia 's Health and Agriculture Ministries particularly have been criticized for not acting fast enough to quell the spread of the disease when it first appeared in 2003, allowing it to spread to 26 of the country's 33 provinces. The government says it can afford to do little more than vaccinate poultry stocks slaughtering all chickens and ducks in affected areas would be too costly, reports the AP.