Prisoners to move out of Abu Ghraib

The US military says it will begin moving thousands of prisoners out of Abu Ghraib prison to a new jail near Baghdad's airport within three months. 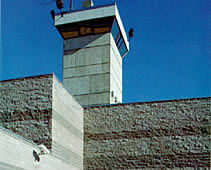 Prisoners to move out of Abu Ghraib

It will hand over the notorious facility to Iraqi authorities as soon as possible.

Abu Ghraib became infamous as the prison where US soldiers abused Iraqi detainees and, earlier, for its torture chambers during Saddam Hussein's rule.

The sprawling facility on the western outskirts of Baghdad will be turned over to Iraqi authorities once the prisoner transfer to Camp Cropper and other US military prisons in the country is finished.

Abu Ghraib currently houses 4,537 out of the 14,589 detainees held by the US military in the country.

Iraqi authorities also hold prisoners at Abu Ghraib, though it is not known how many.

The US government initially spoke of tearing down Abu Ghraib after it became a symbol of the scandal. Widely-published photographs of prisoner abuse by American military guards and interrogators led to intense global criticism of the US war in Iraq and helped fuel the Sunni Arab insurgency.

But Abu Ghraib was kept in service after the Iraqi government objected. Planning for the new facility at Camp Cropper began in 2004, reports Scotsman.