African Union discusses if to turnover Darfur peacekeeping to U.N.

Foreign ministers met at African Union headquarters in Ethiopia on Friday to discuss whether to turnover their peacekeeping mission in Sudan 's Darfur region to the United Nations. The summit, which was expected to last most of the day, comes after the Sudanese government and protesters in Khartoum warned that violence in the troubled region would only escalate if African Union peacekeepers were placed under U.N. command. 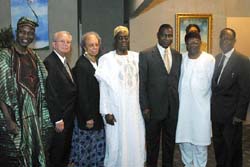 African Union discusses if to turnover Darfur peacekeeping to U.N.

EU foreign policy chief Javier Solana said in Brussels on Thursday he remained hopeful the AU would agree to transfer their mission to a United Nations force. "It is for the leaders who are concerned to take this decision. We hope that the African Union will decide to move to a U.N. mission," Solana said.

In New York , U.S. Ambassador John Bolton said Thursday that the U.S. focus in the last 10 days "has been to avoid a situation where the AU changes or obscures its initial decision in principle to welcome the rehatting" of the AU force. Tens of thousands of Sudanese marched through Khartoum on Wednesday, protesting the plan. The Sudanese government has also been lobbying African leaders to keep the peacekeepers under an AU command.

"If the U.N. arrives the troubles will spread in the region," Mohamed Elsamani , Sudan 's minister of state for foreign affairs, said in Nairobi on Wednesday. The 7,000-strong AU force has faced severe funding and logistical problems, and its mandate expires at the end of March. The Security Council has recommended that the United Nations start planning to take over peacekeeping, reports the AP.