Kurdish rebels killed a Turkish army officer and a military policeman in southeast Turkey and injured 10 other soldiers who were out on routine patrol, a military official said Friday. The attack occurred Thursday night in Sirnak province near the Turkish border with Iraq and Syria , at the foot of the Gabar Mountain , the official said on condition of anonymity. Turkish officials are rarely permitted to speak to the media on the record. 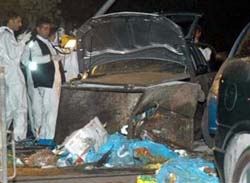 The wounded soldiers were taken to a hospital in Diyarbakir for treatment following the attack and an ensuing firefight, the military official said. He did not know whether any guerrillas were also killed or injured in the attack. The report of the attack comes just a day after an apparent suicide bombing killed three and injured 19 in the eastern city of Van , and as Turkish Kurdish rebels fighting for autonomy have escalated their attacks on government targets.

There has yet been no claim of responsibility for the bombing in Van, though media reports said police had been on the lookout for three suspected suicide bombers there. Guerrillas of the Kurdistan Workers' Party, or PKK, which has been fighting for the past two decades in Turkey's southeast in a fight that has claimed more than 37,000 lives, were said to be behind the attack on the soldiers Thursday night. The PKK is listed as a terrorist organization by Turkey , the United States and the European Union, reports the AP.