Asian giants India and China prepared Friday for a new round of weekend talks to resolve a decades-old border dispute as officials warned that political compromises from both sides would be needed to break the current stalemate. The talks will take place on Saturday in New Delhi and on Sunday in the southern city of Kottayam in the coastal state of Kerala, Indian and Chinese officials said. 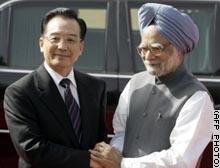 India 's National Security Adviser M.K.Narayanan and China 's Vice Foreign Minister Dai Bingguo will lead the talks, an Indian foreign ministry statement said late Thursday. India and China fought a border war in 1962 and have long had adversarial ties, but relations have warmed in recent years and the two countries have expanded economic ties, including plans for joint collaboration in oil exploration and information technology.

Indian and Chinese negotiators have so far held six rounds of talks in both countries over the boundary question. The dispute relates to 125,000 square kilometers (50,000 square miles) of disputed territory along their mountainous frontier. India says China still holds 41,440 square kilometers (16,000 square miles) of its territory in the Kashmir region, while Beijing lays claim to a wide swath of territory in India's northeastern state of Arunachal Pradesh, which shares a 1046-kilometer- (650-mile-) border with China's Tibet region.

"The process is at a stage where the political compromises are required. That is not forthcoming," said an Indian official with knowledge of the progress of the talks. "In terms of a final resolution, while both sides have a mandate, it's not happening," the official said, speaking on condition of anonymity because he is not authorized to speak to media.

"The discussions have moved away from the technical aspects ... to a broader sweep," the official said. "At the moment there doesn't seem to be a push from either side and a greater push is needed from the Chinese side." The official said momentum could come from an expected visit to India by Chinese President Hu Jintao, and a reciprocal visit to China by the Indian prime minister. While dates have not been decided, at least one of the visits is expected in the summer, he said. An official at the Chinese Embassy offered no comment apart from confirming that the talks were starting Saturday, reports the AP.