A glimmer of optimism exists on the Iran nuclear standoff as the U.N.'s nuclear watchdog agency meets for a second day in Vienna. 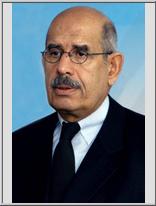 "I am still very much hopeful that in the next week an agreement could be reached," ElBaradei told reporters Monday.

While ElBaradei did not elaborate on his comments, diplomats told The Associated Press they believed it was linked to a confidential Russian proposal to allow Iran to enrich some uranium domestically.

ElBaradei said the IAEA board could formally take up the Iran issue as early as Tuesday afternoon.

It is not clear when, or even if, the board would take a vote to confirm its decision last month to report Iran to the U.N. Security Council.

Meanwhile, Iran President Mahmoud Ahmadinejad called on the IAEA to compensate Iran for its suspension of nuclear activities in 2003, state television reported Tuesday.

"The IAEA now has to compensate Iran for causing damage to the development of its science, technology and economy" due to the suspension of nuclear activities, state television quoted Ahmadinejad as saying, AP reported.

After a meeting with his Canadian counterpart in Ottawa Monday, Lavrov said a uranium enrichment joint venture between Iran and Russia was still on the table, but would require Tehran returning to a moratorium of its own testing, the Russian news agency Interfax reported.

"A set of measures should be taken," Lavrov said. "The joint venture will guarantee that all of the needs of Iran's peaceful nuclear sector will be met."

Moscow has offered to enrich uranium for Tehran in Russia and then ship it to Iran. But much still needs to be sorted out, according to ElBaradei, reports CNN.