Indian sex workers on Tuesday slammed a proposed anti-prostitution law, saying it would push their work further underground and interfere with efforts to halt the spread of AIDS in the country. Prostitution is illegal in India , but the ban is rarely enforced. 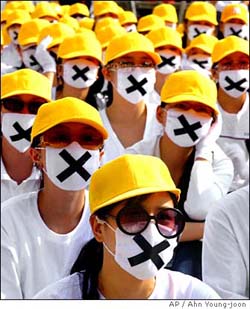 The proposed law, which has yet to pass Parliament, aims to crack down on prostitution by penalizing brothel owners and customers. It also gives police a freer hand to raid such establishments. Sex workers argued Tuesday that the law would further stigmatize them, exposing them to greater risks, including HIV.

"When a customer comes to the brothel, we ask him to wear a condom," said Girija, a prostitute from the southern state of Karnataka who uses only one name. "But when there is no brothel, I will have to work secretly, will I be able to operate on my own terms?"

She was speaking at a news conference held by The National Network of Sex Workers, which is organizing a rally in New Delhi on Wednesday to protest the proposed law. If the bill passes, "how will we feed ourselves? How will we survive?" asked Girija, a member of the network.

The tough bill comes as health officials seek to educate sex workers about AIDS and encourage them to use condoms. With 5.13 million cases, India ranks second only to South Africa in terms of the number of people infected with HIV, the virus that causes AIDS, reports the AP.