Ireland could reduce its unusually high level of driving-related fatalities if it learns lessons from other countries such as Australia , Sweden and the United States , organizers of a road safety conference said Tuesday. The two-day event at Dublin Castle , the government's major conference venue, featured world experts in road design and law enforcement. Ireland 's National Roads Authority, which organized the event, said the aim was to slash Ireland 's death toll, which reached 399 last year in this country of 4 million a rate about 50 percent higher than the western European average. 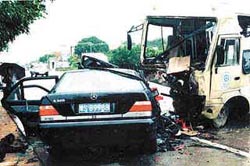 Cullen said Ireland hoped to adopt Sweden 's policy of building three-lane rural roads that designate the middle lane as a passing lane, alternating in direction every few kilometers (miles). "This ensures that people know they will be able to overtake safely soon," he said.

Cullen also cited the example of Australia 's "forgiving roads," on which dangerous roadside objects such as trees have been either removed or set apart by strong barriers. Ireland has yet to enact many of the recommendations from its last international road safety conference in 1998, including the use of speed-detection cameras nationwide and giving police the power to randomly give drivers breath tests for alcohol, reports the AP.