Sri Lanka to be free from land mines by 2008

Sri Lanka has cleared more than half of the country's estimated 1 million land mines, sown during two decades of civil war, and should be able to complete the task within two years, a government official said Tuesday. 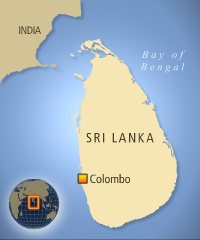 Sri Lanka to be free from land mines by 2008

The mines were laid during fighting in Sri Lanka's northeast, the main battleground between government forces and rebels who have been fighting since 1983 to carve out a separate state for the island's 3.2 million Tamil minority.

"Almost 55 percent of land mines have been cleared so far," M.S. Jayasinghe, secretary in charge of reconstruction and development in conflict-affected areas, told a news conference in Colombo.

"All the land mines in Sri Lanka will be cleared by 2008 at the latest, according to our current de-mining programs," Jayasinghe said.

The de-mining program began after a Norwegian-brokered cease-fire agreement was signed in 2002.

Jayasinghe said the clearing of land mines in villages where mostly Tamils are living will be completed by the end of this year.

"However, clearing of mines in high-security zones maintained by the military around their camps and strategic points will take time," he said.

He said U.N. agencies are monitoring de-mining activities in both government and rebel-held areas.

Many countries including the United States, Japan, Britain, Canada, Denmark, Netherlands, Norway and Australia have provided financial support to the de-mining program, reports the AP.