Malaysia 's foreign minister said Tuesday his trip to Myanmar to monitor the progress of democracy has stalled again because of stonewalling by the country's military rulers. Foreign Minister Syed Hamid Albar told reporters that the junta has failed to respond to his request to let him visit in the middle of this month, further delaying a trip that was to have taken place in January. 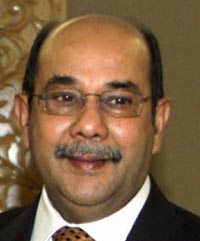 "I have given them some dates for the middle of this month but they have not come back to us. We take it that they will not be able to receive us on those dates," Syed Hamid said. But he added he hopes to be allowed to visit in April. "I am very keen to see some affirmative response by Myanmar . We hope they will open up," he said.

The veteran diplomat was chosen by the 10-country Association of Southeast Asian Nations to visit Myanmar to verify the junta's claims, greeted by skepticism by the West and many Asian countries, that it is making progress toward democracy.

Myanmar , a member of ASEAN, agreed to the visit in December after intense pressure from its neighbors. ASEAN has been chided by the West for not pressing Myanmar 's military rulers, in power since 1962, to restore civilian rule. Syed Hamid has also said he wants to visit opposition leader Aung San Suu Kyi, who is currently under house arrest. The junta has not let any outsider see her.

Syed Hamid expressed hope that he and his team will be allowed to visit Myanmar before an ASEAN foreign ministers' retreat in Bali , Indonesia April 17-18. "I hope to be able to call Myanmar 's foreign minister to know exactly what we should do now. I think it will be very sad if by April when we have our meeting we still have no development," Syed Hamid said.

Syed Hamid sent an envoy to Myanmar two weeks ago to discuss the program and agenda for the visit. But the authorities have still not said whether he can meet with opposition figures including Suu Kyi. "We have indicated it will be better for us to see everybody who matters but at present they have not given us any indication who we can see," he said.

Myanmar , also known as Burma , has been widely shunned by the West since 1990, when its military leaders refused to hand over power after Suu Kyi's party won promised elections by a landslide. It's Asian allies, who have advocated engaging the junta rather than confronting it, also appear to be losing faith in its promises of democracy, reports the AP.