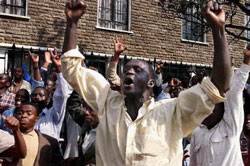 Michuki had ordered Thursday's raids, during which heavily armed and masked police smashed The Standard Group's printing press and disrupted Kenya Television Network's broadcast for 13 hours. It was the first time since Kenya 's 1963 independence that the government shut down major media operations. Recently, the country's media have been reporting on corruption scandals swirling around President Mwai Kibaki, who has been seen as increasingly politically isolated.

The raids were condemned by Cabinet ministers, diplomats and citizens. "It is vital that we have a free press in Kenya ," said translator Rhoda Atieno, 31, who participated in Tuesday's protest. "The assault on the Standard newspaper group was outrageous and shouldn't happen in a democracy, and those responsible should go, without negotiation."

Three journalists for The Standard also were charged Thursday with causing public alarm by publishing a Feb. 25 report stating that Kibaki had met secretly with a key political opponent. The charges did not explain how the newspaper story had caused alarm. The journalists had been detained three days earlier, despite laws stipulating they should be held no more than 48 hours without charge. Kibaki and the National Rainbow Coalition swept 2002 elections on an anti-graft and reform platform, ending 39 years of government led by the Kenya African National Union party, reports the AP.