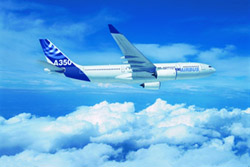 Officials also were to discuss boosting the number of destinations and the frequency of flights during the two days of talks. Under an existing India-Pakistan air services agreement signed in the 1970s, only two cities in each country, New Delhi and Bombay in India and Lahore and Karachi in Pakistan , can be linked by direct flights.

At present, only the state-run flag carriers operate on these routes, not private airlines. India is keen on changing the agreement to allow multiple destinations and open the skies to private airlines, although the strigent visa requirements for nationals of either side would have to be eased, an official said on condition of anonymity as he is not authorized to speak to the media.

India and Pakistan have fought three wars since the bloody partition of the subcontinent at independence from Britain in 1947, including two conflicts over the Himalayan region of Kashmir , divided between them but claimed by both, reports the AP.