British troops could be out of Iraq by 2008

Most of Britain 's 8,000 troops in Iraq could be withdrawn by the middle of 2008, a senior British general said in an interview published Tuesday. The Ministry of Defense, however, said that Lt. Gen. Nick Houghton was only outlining one possible withdrawal scenario in his interview with The Daily Telegraph. 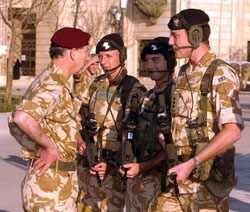 British troops could be out of Iraq by 2008

"Speculation on dates for handover and force levels is just that, speculation. Gen. Houghton outlined one possible scenario among many," the ministry said in a statement released Tuesday. Prime Minister Tony Blair and senior government officials have consistently refused to be pinned down on dates for ending the troop presence in Iraq .

The Daily Telegraph, which interviewed Houghton in Baghdad on Monday, quoted him as saying the troops could largely be withdrawn in a four-phase process ending in the middle of 2008.

Houghton said the first step would be the handing over of security responsibilities to Iraqi forces in Maysan and Muthanna provinces, possibly in a few months. Houghton stressed that the plan was "reversible to an extent as there will be residual coalition forces present who can maintain a very low profile." "There may be a need to go back in somewhere. I hope not. I hope we make our judgments right," The Daily Telegraph quoted him as saying, reports the AP.