The chief U.S. negotiator in free trade talks with South Korea said Tuesday she is under orders to conclude an agreement by the end of this year good enough for lawmakers in Washington to accept. "We look forward to coming home with a good deal and a fair deal for the United States and Korea that we can get through our Congress," Assistant U.S. Trade Representative Wendy Cutler told a gathering of the American Chamber of Commerce in Korea . 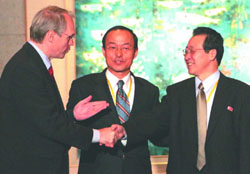 Cutler was in Seoul for preliminary talks with her South Korean counterpart Kim Jong-hoon and other officials, which she described as "productive." The two countries said last month that they would begin talks on a free trade pact that, if successful, would be the biggest for the United States since the North American Free Trade Agreement of 1993.

The announced Monday that formal negotiations will start on June 5 in Washington , putting them under a tight deadline as the Bush Administration's authority to negotiate an agreement and submit it to Congress for a simple yea-or-nay vote without amendments runs out in June 2007.

The talks face strong resistance from South Korean farmers who have protested violently against any reduction of protections for agriculture, especially for rice. The U.S. wants more access for its automobiles, pharmaceuticals, steel and textiles in South Korea .

She also strongly hinted there may be more free trade talks coming. "And without giving anything away we may even be announcing a launch of an FTA with another Asian partner shortly," she said, without elaborating.

Referring to South Korea , Cutler expressed satisfaction at what she described as broad bipartisan support among U.S. lawmakers for a deal. But she acknowledged that difficulties should be expected in Congress, where trade deals have often been marked by contentious debate and eventual passage by narrow margins.

"It's tough up on Capitol Hill in terms of getting our trade deals through and I think the CAFTA experience underscored this," Cutler said. CAFTA, or the Central American Free Trade Agreement with Costa Rica , the Dominican Republic , El Salvador , Guatemala , Honduras and Nicaragua won congressional approval after a hard-fought battle last year, winning passage in the House of Representatives by only two votes.

"We would hope that the U.S. business community and other stakeholders supporting this negotiation would take the opportunity to educate our congressmen on the benefits of this agreement for them," Cutler said of the proposed agreement with South Korea , reports the AP.