Pakistani prime minister to outline his vision of regional stability

Pakistan 's Prime Minister Shaukat Aziz was to outline his vision of his country's role in regional stability Tuesday as he addressed a military and political think tank. In a speech to the International Institute for Strategic Studies in London , Aziz will talk about conflict resolution in Asia . 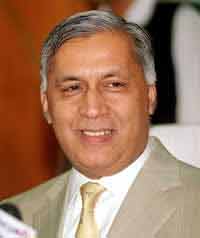 Pakistani prime minister to outline his vision of regional stability

On Monday, he told the Asia 2015 conference, a meeting of Asian ministers organized by Britain 's international development ministry, that resolving regional political disputes was crucial to economic development.

"Conflicts not only cause suffering for the people but consume huge resources away from national development," Aziz said. He also told delegates that he believed the security of sources of energy, water and food must be addressed to prevent future conflict within Asia . Aziz is in Britain on a four-day visit and met Monday with British Prime Minister Tony Blair, reports the AP.