Malaysia has lifted a two-year-old ban on beef imported from the United States to make up for a shortage after Australian imports were halted, officials and news reports said Tuesday. The ban on de-boned meat from the United States , imposed in December 2003 over fears of mad cow disease, was lifted in mid-February, veterinary services director-general Mustapha Jalil said. 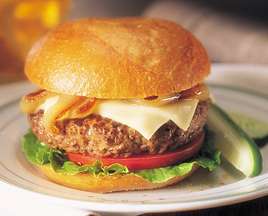 "Based on our checks, we are allowing the import of de-boned meat from animals less than 30 months old," said Mustapha, adding that religious department and veterinary officials had last year inspected two U.S. slaughterhouses that supply meat to Malaysia .

The ban was lifted to ease the shortage of imported beef following a similar ban on Australian beef last year that had failed to meet halal, or Islamic, requirements, The Star newspaper reported. The majority of Malaysia 's 26 million people are Muslim. Under Islamic dietary rules, animals must be slaughtered and processed under religiously prescribed rules, known as halal.

Mad cow disease is the common name for bovine spongiform encephalopathy, or BSE, a degenerative nerve disease in cattle that is linked in humans to the rare but fatal variant Creutzfeldt-Jakob disease, reports the AP.