Venezuela on Monday proposed a new Latin American radio network to follow the example of a regional television station set up last year with support from President Hugo Chavez's government. 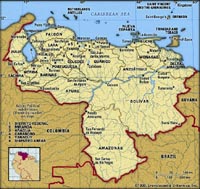 Information Minister Yuri Pimentel proposed the plan for a radio network known as Radiosur during a meeting of state radio representatives from various countries.

The aim of the project is to bring together existing radio stations from across Latin America in single network.

Representatives of various state radio stations were expected to take up the proposal during their meeting in Caracas. Many of the details remain to be worked out.

The Venezuela-backed television station Telesur began broadcasting last year, presenting news broadcasts and billing itself as a Latin American alternative to large corporate media outlets. Telesur has been financed largely by Chavez's government, with help from Argentina, Cuba and Uruguay.

Critics have called it an international extension of Venezuelan state TV, but station managers say Telesur has editorial freedom. Chavez has called the station a breakthrough toward regional integration.

Pimentel said starting the Caracas-based TV station was a more complicated task than what would be needed to bring together a radio network, reports the AP.