Japanese negotiators were hoping for a reponse from China on Tuesday to a proposal for joint development of disputed gas deposits in the East China Sea. 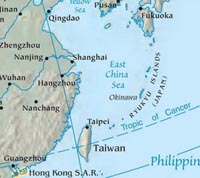 Kenichiro Sasae, head of the Japanese Foreign Ministry's Asia-Oceania Bureau, and his Chinese counterpart, Hu Zhengyao, were meeting Tuesday morning after several hours of talks Monday, an official with the Japanese Embassy in Beijing said Tuesday. He spoke on condition of anonymity in keeping with embassy policy.

The official could give no details about the substance of the talks, but they were expected to focus on the Japanese joint development proposal.

"We have already presented our position, and are expecting to hear what the Chinese side thinks about this," Sasae was quoted as saying by Japan's Kyodo News agency Monday.

At the outset of the talks, Hu said he believed the two sides would resolve the issue.

"Our goal is to get over differences and seek cooperation," he said. "We need to solve the East China Sea issue through dialogue, which is even more important given the difficulties faced by China-Japan relations," reports the AP.