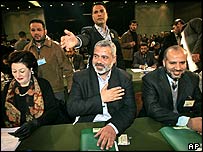 Israel increased the restrictions following the rise of the Islamic group Hamas in parliament elections in January. The limits mostly target Hamas, which has 74 lawmakers. Hamas has killed hundreds of Israelis in attacks, reports the AP.