When President Jacques Chirac spoke in Saudi Arabia this weekend of the need to avert a "clash of civilizations" between the Western and Muslim worlds, he could have been thinking as much about the situation back in France as in the Middle East. Chirac knows that France, delicately balancing Western Europe's largest populations of both Muslims and Jews and many other French voters who are at best ambivalent about immigration, cannot afford to let an "us versus them" mentality take root. 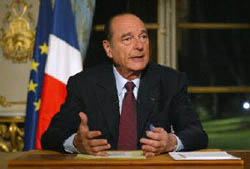 Riots last fall in depressed French suburbs where many Muslim immigrants and their children live showed the latent anger there over unemployment and other ills. And Paris wants to ensure that alienated French youths do not turn to terror in the same way that British Muslims who bombed the London transport system did. So, although one of Chirac's main goals in Saudi Arabia was to win contracts for French companies, he also projected himself as a force for moderation.

He called for respect of cultural diversity and religious beliefs. He appealed for tolerance and dialogue to "avoid misunderstandings." He praised Saudi Arabia's moderating role in the Middle East and warned of centrifugal forces threatening to tear apart neighboring Iraq. Like other governments, France fears that Iraq is breeding terrorists who might one day carry holy war to Paris and other Western capitals. Even before his Saudi visit, the French leader had trodden a fine line on Danish cartoons of the Prophet Muhammad that have provoked violent protests in Muslim countries and angered Muslim leaders here, saying freedom of expression must be exercised responsibly.

And, in Saudi Arabia and during his 11 years as president, Chirac has courted ordinary Arabs. His opposition to the U.S.-led invasion of Iraq, the hospital treatment that France gave Yasser Arafat in his dying weeks, and France's efforts with the United States to prise Lebanon from Syria's grip have helped to burnish Chirac's credentials as a Western friend, not foe, of the Middle East.

On Hamas, too, Chirac is developing a nuanced position. The militant group's victory in Palestinian elections has placed the European Union in a bind because it lists Hamas as a terrorist organization. As such, the EU cannot negotiate with the group.

But to give it the cold shoulder entirely could weaken EU influence in Middle East peacemaking and push Hamas further into the arms of Iran, which can easily afford to bankroll the Palestinians with the fortune it is reaping from high oil prices. On his Saudi visit, Chirac stuck to the EU line that Hamas must renounce violence and recognize Israel risk losing the millions of euros (dollars) that the EU gives for Palestinian education, health care and social services and to help pay Palestinian Authority salaries and utility bills.

But Chirac qualified that position at his closing news conference in Riyadh on Monday, saying that he would oppose slapping punitive sanctions on a Hamas-led government because the effects would "be borne mainly by the Palestinian people." Chirac said his position stemmed partly from his dislike of "sanctions in general", reports the AP.