A bomb planted under the car of a military officer detonated in southeastern Turkey on Monday, injuring at least one civilian and causing damage to an apartment building, local authorities said. In a separate attack, six police officers were injured when assailants opened fire on a police vehicle patrolling a street in the predominantly Kurdish southeastern city of Batman, Gov. Haluk Imga said. Two of them were in serious condition. 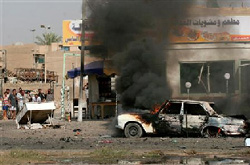 The bomb, believed to have been planted by autonomy-seeking Kurdish rebels, exploded Monday morning in the town of Idil in Sirnak province, security officials in the region said. The car was parked in front of an apartment building housing the families of military and police officers.

The owner of the apartment building was slightly injured in the head during the explosion which comes at a time of heightened tensions in the region, the scene of a bitter fight between autonomy-seeking Kurdish guerrillas and Turkish troops.

Guerrillas of the Kurdistan Workers Party, or PKK, have recently escalated their attacks in the region, while Kurdish militants believed linked to the outlawed group have staged several bombings across Turkey during the past month. The fighting has killed more than 37,000 people since 1984, reports the AP.