Separatist leader Igor Smirnov on Monday criticized neighboring Ukraine for new customs rules that require exports from the separatist republic of Trans-Dniester to be registered in the Moldovan capital. "This means a slow (economic) death for Trans-Dniester," Smirnov was quoted as saying by the official Olvia-Press news agency. 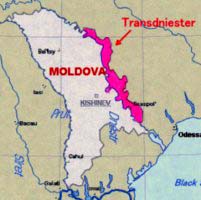 From Friday, March 3, all goods exported to Ukraine from Trans-Dniester need to be officially stamped by authorities in Chisinau, the Moldovan capital. That would require separatist authorities to pay taxes to the Moldovan government, which they are oppose.

Smirnov said the decision by Ukraine would affected food and energy supplies for the 550,000 residents. Trans-Dniester exports textiles, metallurgical products and brandy to Ukraine, worth US$1.5 billion ( Ђ 1.24 billion) a year.

"In this state of an economic blockade, the only state Trans-Dniester can place its hope in is Russia," Smirnov was quoted as saying. Trans-Dniester is not recognized internationally but receives strong support from Moscow, which has 1,500 troops stationed there. Much of its income is believed to come from smuggling of weapons, cigarettes and other products.

In recent days separatist authorities have set up a crisis team to "coordinate the activities in the important enterprises." In retaliation, separatists blocked three trains carrying good from Ukraine to Moldova which were traveling through Trans-Dniester. Trans-Dniester, a region inhabited largely by ethnic Russians and Ukrainians, broke away from Moldova in 1992, after a war that killed 1,500 people, reports the AP.