Two Pace University students were questioned by Secret Service officers after they heckled former President Bill Clinton during a speech at the school, a university spokesman said. 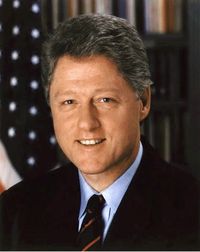 The outburst came at the end of a speech Sunday in which the former president was applauded by the crowd of about 1,800, Cory said.

The two students were asked to leave by local police, then were questioned by the Secret Service and released, Cory said. Their identities were not released.

During his speech, Clinton urged stricter security measures at the nation's ports.

"I still really can't believe we only check five percent of our containers at all the ports in America , when we've had now for four years a study saying that unless we do 10 to 20 percent, there's no deterrent effect at all," he said, reports the AP.