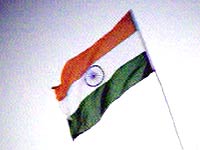 A defiant Iran has warned the 35 nations of the International Atomic Energy Agency's board, which includes India , that it will press ahead with uranium enrichment if they push for U.N. Security Council action this week over concerns the Islamic republic is seeking nuclear arms.

India has long-standing ties with Iran , and Prime Minister Manmohan Singh told lawmakers that "confrontation should be avoided at all costs."

"For this to be possible, time must be given for diplomacy to work," he said. "Confrontation is not in the interest of India or of our region."

The IAEA was to meet this week in Vienna to discuss Iran , which insists its nuclear program is for peaceful energy purposes.

The United States has long pushed a hard line on Iran , and while India and America are growing closer a fact highlighted by last week's visit of U.S. President George W. Bush Singh's comments served as a reminder that New Delhi will likely continue to chart its own foreign policy course on Iran .

Singh did not say which way India would go if the IAEA meeting comes down to a vote over whether the Security Council should take punitive action against Iran .

Indian officials have said they do not want Iran to develop nuclear weapons. But Singh has faced scathing criticism from left-wing political allies since India in February supported an IAEA resolution referring Tehran to the council, which could impose sanctions.

Communist political parties crucial to the parliamentary majority of Singh's coalition have accused the prime minister of bowing to pressure from the United States to vote against Iran , a longtime Indian ally.

In comments clearly aimed at placating those critics, Singh told Parliament on Monday that his "government is committed to widening, deepening and expanding our diverse and mutually beneficial ties with Iran ."

India , which has few domestic sources of fuel, plans to build a 2,800-kilometer (1,750-mile) gas pipeline from Iran through Pakistan , a project that has raised concerns in Washington .

Any initial decisions the council may make based on the outcome of board meeting will be mild, stopping far short of sanctions, the delegates have suggested.

Before Singh addressed lawmakers Monday, his spokesman said the prime minister told Russian President Vladimir Putin over the weekend that India supported Moscow 's efforts to diffuse tensions over Iran 's decision to resume uranium enrichment, an activity that can make both fuel or the core of nuclear warheads.

Russia has offered to establish a joint uranium enrichment venture with Iran as a way to ease concerns that Tehran could divert nuclear material for weapons.