String of explosions in Baghdad and north of the capital Monday killed at least 11 Iraqis and injured 47. An American soldier was reported killed in insurgency-plagued western Iraq. 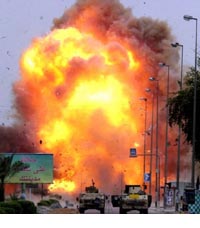 The violence underscored a dangerous leadership vacuum as Sunni Arab and Kurdish politicians increased pressure on Shiite Prime Minister Ibrahim al-Jaafari to abandon his bid for a new term and leaders of Iraq's Shiite majority struggled to overcome internal divisions.

Despite the political squabbling, President Jalal Talabani said he would issue a decree Monday calling the new parliament into session for the first time on Sunday, starting the clock on a 60-day period during which it would have to elect a new president and approve a prime minister and Cabinet.

The constitution requires parliament to hold its first meeting no later than four weeks after the vote was certified, which happened Feb. 12, nearly two months after the election was held. But a leading member of al-Jaafari's Dawa Party, Ali al-Adib, said parliament's main Shiite bloc would request that the session be postponed until there was agreement on who should occupy the top government positions.

The struggle to form a broad-based governing coalition acceptable to all the country's main ethnic and religious groups has been hampered by sectarian conflict and insurgent violence.

Many of Monday's attacks targeted the country's Shiite-led security forces, accused by Sunni Arabs of repeated abuses against them under the cover of fighting the deadly Sunni-driven insurgency. The government denies the accusations.

The bloodiest attack happened in Baqouba, where a car bomb targeting an Iraqi police patrol exploded near a market, killing at least six people and injuring 23, including four patrolmen, police said.

The mixed Sunni-Shiite city 60 kilometers (35 miles) northeast of Baghdad has been at the forefront of a surge of sectarian violence unleashed by the Feb. 22 bombing of a revered Shiite shrine in the central city of Samarra.

One bomb exploded as a police patrol was driving through a northern Baghdad neighborhood, killing one officer and a civilian bystander, Interior Ministry official Maj. Falah al-Mohammedawi said. Three others were injured in the blast, including a patrol member, he said.

Two bombs went off in Baghdad's notorious southern Dora neighborhood. One targeted an Interior Ministry patrol, wounding one commando, police said. A second went off as a U.S. patrol was passing, injuring five policemen who were guarding a bank and two civilians, said al-Mohammedawi. There were no immediate reports of U.S. casualties.

An earlier explosion near the Shiite Buratha mosque in northern Baghdad caused no casualties, police said, reports the AP.