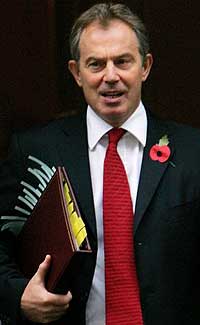 Aziz and Blair are likely to discuss the deployment of an extra 3,300 British soldiers to Helmand , a southern Afghanistan province which borders Pakistan .

Troops are arriving in the volatile province as part of an expanded NATO-led rebuilding and security mission.

Aziz is also due to address the International Institute for Strategic Studies, a military think tank, on Tuesday, with a speech on regional stability.

Blair and Aziz speak Monday at the Asia 2015 conference on Asian development and poverty, organized by Britain 's Department of International Development, reports the AP.