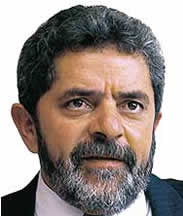 Brazilian President Luiz Inacio Lula da Silva was due in Britain Monday for a state visit.

The president, known as Lula, and his wife were invited to stay at Buckingham Palace as guests of Queen Elizabeth II and her husband, Prince Philip.

Silva will meet with Prime Minister Tony Blair, whose centrism may clash with the left-wing Brazilian's views, and is also scheduled to see a delegation from London Mayor Ken Livingstone's office during his three-day visit.

The city was the target of intense criticism from Brazil last summer after police killed an innocent Brazilian electrician on a London subway two weeks after bomb attacks killed 52 commuters. Officers mistook Jean Charles de Menezes, 27, for a suicide bomber, reports the AP.