Wealthy nations slow to respond to spread of bird flu

Wealthy nations have been slow to respond to the spread of lethal bird flu, the head of the U.N. Food and Agriculture Agency said in an interview published Monday. 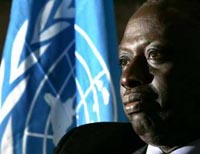 Wealthy nations slow to respond to spread of bird flu

"Governments have sinned by failing to look ahead and have a sense of solidarity," the French daily Liberation quoted Jacques Diouf as saying.

He said the "crisis really began in December 2003," but that "rich countries only began to respond when the flu reached Turkey," two years later.

"Developed countries thought that this was going on in Asia, that it was far away and that we were exaggerating the risks of the epidemic," said Diouf, adding that his agency had "tried to alert the international community" to the dangers.

"Egotism reigns," he said, adding that a global community based on solidarity was a still a "dream."

Diouf recommended the reinforcement of veterinary services on the ground in affected countries and the development of a cheaper, easier-to-administer vaccine as ways of curbing the spread of the virus, which has leapfrogged from Asia to Europe and Africa, reports the AP.