Reese Witherspoon won the best actress Oscar on Sunday for her portrayal of country singer June Carter in the musical drama "Walk the Line." 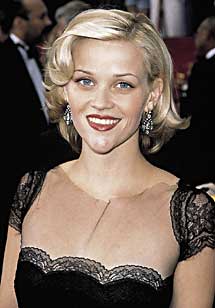 It was the first Oscar for Witherspoon, 29, who is best known for her role as the bubbly but not-so-dumb blonde in the two "Legally Blonde" comedies that made her one of Hollywood's highest paid female stars.

"Oh my goodness. I never thought I'd be here in my whole life, growing up in Tennessee," Witherspoon said.

She recalled that June Carter, who died in 2003, months before her husband, country music icon Johnny Cash, would tell her, "I'm just trying to matter," when asked how she was doing.

"I know what she means," Witherspoon said. "I'm just trying to matter and live a good life, and make work that means something to somebody."

Despite having no previously known talents as a singer, Witherspoon sang all her own vocals in "Walk the Line," which chronicles Cash's clumsy efforts to woo a reluctant Carter, even as both were married to other people at the time.

Witherspoon gives what is regarded as her richest and most serious performance to date as the tough but winning Carter and has already won a slew of awards, including a Golden Globe, BAFTA, and Screen Actors Guild trophy.

Witherspoon has said she just fell into movies without any formal acting training. She earned a Golden Globe nomination for playing a high school whiz in the 1999 film "Election," but it was "Legally Blonde" in 2001 that established her as a star.

A year later she signed up for the "Legally Blonde 2: Red, White & Blonde" sequel for a reported $15 million and launched her own production company.

Witherspoon's youth, good looks and marriage to actor Ryan Phillippe at the age of 23, have made her a favorite paparazzi target. Last year a photographer was charged with battery while trying to get pictures of Witherspoon and her two young children while they were on a birthday outing to a Disney theme park, reports the AP.