A Vietnamese court on Friday sentenced former British glam rocker Gary Glitter to three years in prison for molesting two underaged Vietnamese girls, with the judge condemning him for "disgusting and sick" behavior. 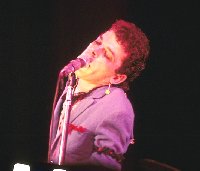 Glitter, 61, whose real name is Paul Francis Gadd, was found guilty of committing obscene acts with 10- and 11-year-old girls at his rented seaside villa in southern Vung Tau last year.

The judge said Glitter would be deported from Vietnam back to Britain after serving his sentence. He was also required to pay compensation of 5 million dong (US$320) to each girl's family and court fees.

In its verdict, the court cited graphic testimony from the girls that Glitter had fondled and molested them multiple times in his villa and in nearby hotels.

In reading out the verdict, Judge Hoang Thanh Tung condemned Glitter for pedophilia.

"Caring for children is to care for our future ... but Gary Glitter's acts went against this," the judge said. "He sexually abused and committed obscene acts with children many times in a disgusting and sick manner."

The former glam rocker showed no emotion while the verdict was read, but threw the court into disarray by proclaiming his innocence afterward.

"I haven't done anything. I'm innocent. It's a conspiracy by you know who," Glitter shouted, apparently referring to British tabloid newspapers that had tracked down his presence in Vietnam .

Reporters and onlookers, allowed into the courthouse in southern Ba Ria-Vung Tau province to hear the verdict following the closed two-day trial, pressed toward Glitter in a scene of pandemonium as police fended them off and escorted him out of the building.

Glitter, who could have received up to seven years in prison for his crime, was given the minimum sentence of three years by the court. The judge later explained that among the factors contributing to the lighter sentence was the US$2,000 that Glitter paid to each girl's family as "compensation" in December.

Glitter, a 1970s pop icon in Britain famed for his sequined jumpsuits, platform heels and bouffant wigs, sported a more conservative look for his trial: black clothes and a red bandanna on his head that he removed inside the court.

Glitter, who looked visibly thinner since his arrest, has been held at Phuoc Co prison outside Vung Tau since Nov. 19, when he was caught at the Ho Chi Minh City airport trying to board a flight for Bangkok . Police confiscated his laptop computer, which had thousands of pornographic pictures on it.

The British Embassy, which has provided consular assistance to Glitter, issued a statement saying that it "takes the issue of child sex tourism extremely seriously. ... UK nationals who travel abroad with the explicit intent to abuse children will remain the focus of UK law enforcement activity."

Glitter had hits with "Leader of the Gang" and "Do You Wanna Touch" but is perhaps best known for his crowd-pleasing rock anthem "Rock and Roll (Parts 1&2)," which is still played at sporting events.

His fall from grace began with a conviction in Britain in 1999 for possessing child pornography. He served half of a four-month jail term.

He later went to Cambodia and in 2002 was expelled from that country, but Cambodian officials did not specify any crime or file charges, reports the AP.