Egyptian President Hosni Mubarak will visit Germany later this month for talks expected to address the situation in the Palestinian areas and moves toward democracy in the Middle East, the German government said Friday. 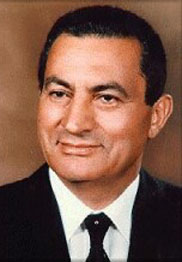 Steg said it would be "important for the chancellor to hear from Hosni Mubarak how he evaluates" the next steps in the Palestinian situation after the parliamentary election victory for the Islamic militant group Hamas.

Merkel also will make clear that Germany is standing by its demands that Hamas recognize Israel, renounce violence and recognize existing agreements under the international "road map" for peace in the region, Steg added.

In addition, he said, "I am sure the chancellor will have an interest in hearing from the Egyptian president how he evaluates the processes of democratization in the Arab and Islamic world and what experiences he has gathered so far."

The U.S. has been pressing Egypt's government to fulfill promises of democratic reform, reports the AP.