Kyrgyz President Kurmanbek Bakiyev said Friday that the first anniversary of the popular uprising that brought him to power will be celebrated as a national holiday. 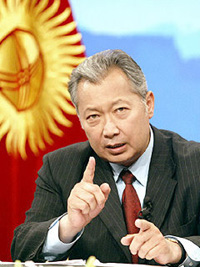 "Kyrgyz people should be preparing to mark March 24 as a big holiday which, I would say, is as big as the Independence Day," Bakiyev told reporters. "This day will be celebrated as the triumph of justice."

He said he would soon sign a decree making March 24 a national holiday in the ex-Soviet republic.

The uprising was triggered by flawed parliamentary elections and allegations of corruption and authoritarianism against former President Askar Akayev. Thousands of demonstrators stormed the presidential headquarters in the capital, Bishkek, forcing Akayev and his family to flee to Russia.

Critics say, however, that Bakiyev has been trying to hold up promised liberal reforms since his election as president last July. Concerns have also been raised about continuing instability in the impoverished Central Asian nation, which in the past year has seen a series of high-profile murders and several violent protests, reports the AP.