Ukraine 's Foreign Ministry demanded an explanation from Belarusian authorities for deporting six Ukrainian journalists and activists who arrived in the ex-Soviet republic to cover its upcoming presidential election. Belarusian authorities detained the six journalists and three activists from the Ukrainian youth party Pora on Thursday. Six were deported the same day, and another three were to be deported Friday, according to one of the activists. 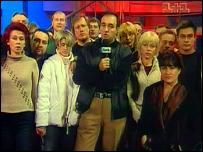 Ukraine 's Foreign Ministry said in a statement late Thursday that the move violated the rights of Ukrainian citizens and demanded an investigation and an explanation from Belarusian authorities. Pora activist Maryana Pochtar, one of those deported, said they were invited by the Belarusian opposition to monitor the March 19 election and also planned to take part in its campaign rallies.

"Our deportation is evidence of the absence of democracy in Belarus ," Pochtar said. Belarusian President Alexander Lukashenko, harshly criticized by Western critics for his intolerance of dissent, is running for re-election and has warned that he won't allow the type of mass protests that ushered in new pro-Western governments in Ukraine and Belarus in recent years.

On Thursday, opposition presidential candidate Alexander Kozulin was beaten and detained by government security agents in Minsk after he tried to enter a conference chaired by Lukashenko. The United States and the European Union strongly condemned the incident and warned that the former Soviet republic would face consequences if elections scheduled this month are not free and fair, reports the AP.