Sri Lankan police seized hundreds of sticks of dynamite from a truck transporting coconuts to the north, where an ethnic Tamil insurgency has raged for over two decades, a police official said Friday. 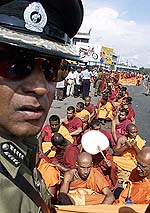 The 348 sticks of dynamite were found Wednesday, hidden among a load of coconuts traveling to the eastern town of Mannar, 220 kilometers (135 miles) north of Colombo, local police chief Anil Priyantha said.

Four people, who were in the truck, were arrested and questioned, he said.

"They told us that the cargo was being transported to a Tamil businessman," Priyantha said, adding that the four had also told police the dynamite was for "fishing purposes."

"We cannot accept that, since there is a large quantity of explosives, which is very unusual," Priyantha said.

Police, acting on a tip-off, stopped the truck at a roadblock at Kurunegala, a town situated about 95 kilometers (60 miles) northeast of Colombo. The truck was on its way to Mannar, which had seen violence blamed on the separatist Tamil Tiger rebels, reports the AP.