Ukraine 's foreign minister on Friday criticized the European Union for refusing to consider his country for full membership in the bloc, and said Ukraine was an inseparable part of Europe with a key role to play in security and democracy. Borys Tarasiuk, speaking to reporters before a second day of meetings between government officials and a visiting EU delegation, said joining the EU and NATO remained strategic goals for the country. 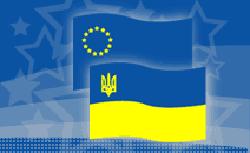 He said the 2004 Orange Revolution that brought Western-leaning opposition leaders to power showed that the country had chosen the path of democracy and was contributing to Europe 's security.

"How can one justify that such a country is excluded?" Tarasiuk said. "We are an inseparable part of Europe ." Tarasiuk said Ukraine remained determined to join the EU by 2015 and will also be ready join NATO in 2008.

The EU has so far ruled out membership for Ukraine , and instead has pursued a "European neighborhood" accord, a tailor-made deal that will let Ukraine participate freely in the EU economy without granting it membership. The two sides launched a plan for closer ties last year, and since then the EU has granted Ukraine market economy status and begun negotiations on a visa accord with the country.

Ferrero-Waldner said earlier that the "European neighborhood" deal was a chance for Ukraine to get closer to the EU and "does not prejudge the future." The EU, which took in 10 new countries in May 2004 and is scheduled to absorb two more within the next year, is reluctant to push ahead with further expansion. In the past year, the bloc has suffered several major setbacks blamed partly on Europeans' wariness about further integration and expansion.

On Thursday, Ferrero-Waldner discussed another pressing concern securing Europe 's energy supplies in a meeting with Ukraine 's energy minister, Ivan Plachkov. A dispute earlier this year over the price of Russian natural gas supplies to Ukraine escalated to the point of a cutoff in supplies for several days. That also caused a reduction in supplies to the rest of Europe that must pass through Ukraine 's pipeline network.

The dispute raised concerns about Russia 's reliability as an energy source and prompted the EU to rethink its energy security policy. Russia supplies about a quarter of the EU's natural gas. Ferrero-Waldner told reporters the Russia-Ukraine gas dispute was "a wake-up call" for the EU. Next week, the European Commission is to issue a report to the 25 EU governments that will touch on nuclear safety, renewable energy, better integration of electricity and gas markets, enhanced pipeline security and more energy savings to safeguard and diversify supplies of energy and cut consumption, reports the AP.