No result in EU-Iran talks

Talks between European Union negotiators and Iran over its nuclear ambitions broke up Friday without any agreement, ministers said. "Unfortunately we were not able to reach an agreement," French Foreign Minister Philippe Douste-Blazy told reporters. He said the EU had been demanding "full and complete suspension" of enrichment and related activities. The sides met for just over two hours. 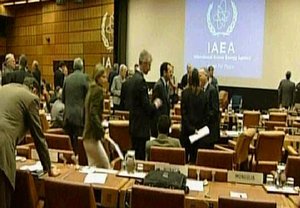 No result in EU-Iran talks

The talks took place just three days before a meeting of the International Atomic Energy Agency's 35-nation board. The board put the U.S. Security Council on alert Feb. 4 after Iran refused to heed requests to reimpose a suspension on enrichment, which can make both nuclear fuel or the fissile material for warheads. Douste-Blazy, his German counterpart Frank-Walter Steinmeier and a senior British official met with Iranian chief negotiator Ali Larijani after his arrival from Moscow , where Russia tried to persuade Iran to accept its offer to enrich uranium for Iran . Before leaving, Larijani warned that handing over the nuclear issue to the U.N. Security Council, s the United States has demanded would kill Moscow 's initiative.

A Russian nuclear agency official, who spoke on condition of anonymity because he was not authorized to speak to media, confirmed the Moscow talks had snagged over Iran 's refusal to freeze enrichment. The Russian plan backed by most in the international community including the U.S. and the Europeans is meant to deprive the Iranians of domestic control of all enrichment. Iran restarted some enrichment activities last month, after voluntarily freezing the program during the talks with the Europeans that failed, reports the AP.