The United Nations envoy mediating talks between Kosovo and Serbia wraps up his three-day visit to the province Thursday. Martti Ahtisaari, a former Finnish president, has spent the past days traveling through the province, meeting ethnic Albanians and Serbs, as he prepares to report to U.N. Secretary-General Kofi Annan in mid-March. 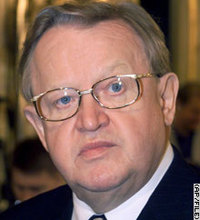 Ahtisaari is trying to steer the two sides toward a solution this year to one of the most intractable problems still unresolved after the Balkan wars of the 1990s.

Kosovo's ethnic Albanians are demanding full independence from Serbia . Serbian leaders in Belgrade seek to maintain at least some control over the province. Kosovo has been a de-facto U.N. protectorate since the end of the war there in 1999. Officials from Pristina and Belgrade met earlier this month in Vienna , Austria for the first round of talks.

Ahtisaari's Kosovo visit happened in the shadow of a major political overhaul, with Prime Minister Bajram Kosumi resigning Wednesday and the head of the parliament Nexhat Daci told to step down by his own party. "I do not see that it will have any negative effect to our processes," Ahtisaari said of Kosumi's resignation.

Western officials are keen to see the talks produce a solution by the end of the year. A caretaker government will continue to work, before parliament convenes in coming days to vote on the appointment of Lt. Gen. Agim Ceku, who has been nominated as the next prime minister, reports the AP.