US and India agree on nuclear deal, Bush leaves for Pakistan

U.S. President George W. Bush turned Friday to nurturing economic ties with this rapidly growing nation of 1 billion, a day after agreeing to help India meet its energy needs while allowing it to continue developing nuclear weapons. "The classic opportunity for our American farmers and entrepreneurs and small businesses to understand is there is a 300 million-person market of middle class citizens here in India ," Bush said Friday during a discussion with young entrepreneurs at a business school here, "and that if we can make a product they want, that it becomes viable." 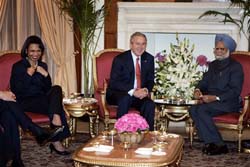 US and India agree on nuclear deal, Bush leaves for Pakistan

A day earlier, Bush and Indian Prime Minister Manmohan Singh inked a deal for the United States to provide nuclear fuel, reactors and know-how to help this energy-starved nation meet its growing demand for power. "Yesterday was a way to put the Cold War behind us," Bush said of the historic nuclear accord.

As part of an effort to nurture economic ties with a nation that was once estranged from the United States , the president flew here to take in both this city's high-tech activity that is helping to drive rapid economic growth and the rural areas around it that lag behind.

The meeting with business leaders and an earlier tour around the dusty campus of an agricultural college were aimed at showcasing ways the United States and India can cooperate to spur innovation across industries.

India 's exploding economy has created millions of jobs. India 's outsourcing industry alone is expected to bring in US$22 billion in revenue this fiscal year, much of that generated by U.S. companies. "People do lose jobs as a result of globalization and it's painful for those who lose jobs," Bush acknowledged. "Globalization provides great opportunities."

The U.S. trade deficit with India , however, nearly doubled between 2001 and 2005 to $10 billion. At Acharya N.G. Ranga Agricultural University , Bush watched Indians using sticks and tools to hand-till soil around young peanuts, tomatoes and soybeans.

Bush was greeted here by the heavy presence of police and paramilitary soldiers. Black flags flew above buildings in the predominantly Muslim Charminar quarter. Banners in English and Urdu that read, "Bush, the enemy of human rights," were strung over streets. Hundreds of communist party supporters carried red flags as they gathered for a protest march.

"We are protesting against George Bush because he is a warmonger. We are demanding the evacuation of American troops from Iraq ," said B.V. Raghavulu, a leader of the Communist Party of India (Marxist). Later Friday, Bush was flying to Pakistan for a visit under tight security to a close ally struggling with terrorism problems. An American diplomat and three other people were killed Thursday when a suicide attacker rammed a car packed with explosives into theirs in Karachi .

U.S. officials said there was evidence the U.S. diplomat, foreign service officer David Foy, was targeted. "Terrorists and killers are not going to prevent me from going to Pakistan ," Bush said at a news conference on Thursday with Indian Prime Minister Manmohan Singh in New Delhi .

Bush aides said there were security concerns about the president going to Pakistan but that officials were satisfied adequate precautions were in place. Eight months in the making, the nuclear accord Bush and Singh announced Thursday would reverse decades of U.S. policy and end India's long isolation as a nuclear maverick that defied world appeals and developed nuclear weapons.

India agreed to separate its tightly entwined nuclear industry declaring 14 reactors as commercial facilities and eight as military, nd to open the civilian side to international inspections for the first time. In return, the United States would provide nuclear reactors, fuel and expertise with this energy-starved nation. The agreement must be approved by the U.S. Congress, and Bush acknowledged that might be difficult. India still refuses to sign the Nuclear Nonproliferation Treaty, and skeptics worry that India 's military nuclear program would remain outside of international safeguards, reports the AP.