The Greek foreign minister will meet Kosovo officials Friday as part of a tour of the Balkans. Dora Bakoyannis will hold talks with Kosovo's top U.N. official Soren Jessen-Petersen and President Fatmir Sejdiu before heading to Belgrade . She will also travel to Austria 's capital, Vienna , to meet Martti Ahtisaari, a U.N. envoy for the Kosovo talks. 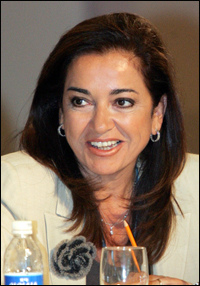 Kosovo's ethnic Albanians are demanding full independence from Serbia but Belgrade is seeking to maintain at least some control over the province. Kosovo has been a de-facto U.N. protectorate since the end of the war there in 1999.

" Greece has an important role to play in the Balkans. ... It's our obligation to do what we can to support stability in the region," Bakoyannis said before her trip. "Kosovo and Serbia are at the center of developments." Greece in the past has appeared wary of calls for independence in Kosovo but sent troops to support the 17,500-strong NATO-led peacekeeping force, reports the AP.