A landmark nuclear cooperation deal with India announced by President Bush on Thursday would cement a major shift in American policy, giving the South Asian giant access to U.S. technology even though some of its reactors would remain off-limits to international inspectors. 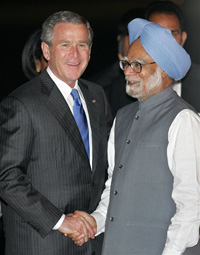 The agreement, which could yet be derailed by Congress, allows India to continue expanding its nuclear weapons arsenal in exchange for permitting international inspections of its civilian reactors for the first time. It lifts a moratorium against nuclear cooperation with a nation that has not signed the 1970 Nuclear Nonproliferation Treaty aimed at halting the spread of atomic weapons.

Critics said the deal could complicate U.S. and European efforts to block nuclear weapons production in countries such as Iran and North Korea while prompting Pakistan to ponder ways of maintaining nuclear parity with India, its longtime rival.

Yet the pact received initial praise from Mohamed ElBaradei, the Nobel Prize-winning director-general of the United Nations' International Atomic Energy Agency, who called it "timely for ongoing efforts to consolidate the nonproliferation regime, combat nuclear terrorism and strengthen nuclear safety."

In announcing the agreement here with Prime Minister Manmohan Singh, Bush said it marked a crucial advance in limiting the spread of nuclear weapons because India would place a majority of its existing facilities,14 of 22,under international scrutiny for the first time.

But it also appeared that India had scored a major victory in preserving its weapons-making capabilities while setting the stage for major U.S.-backed technology upgrades in its civilian energy program. The accord gives India the final say over which existing and new reactors will be closed to inspectors — and officials indicated Thursday that at least one massive new "fast-breeder" plant would be used for weapons and therefore closed to international observers.

Bush and Singh emphasized that the agreement was a symbol of a rapidly warming and mutually beneficial relationship between the U.S. and India, which traditionally have not been allies. India, with a population of 1.1 billion, is the world's biggest democracy, but historically it was closer to the Soviet Union, and in recent years has drawn criticism from Washington for its active nuclear weapons program. More recently, India opposed the U.S.-led invasion of Iraq, reports Los Angeles Times.