Protestors carried posters of Osama bin Laden and burned an effigy of U.S. President George W. Bush as the American leader arrived in this south Indian city Friday. Chanting "Bush hands off India " and "Bush go home," several hundred communist and Muslim demonstrators marched through Hyderabad , and shops in the city's Muslim-dominated Charminar neighborhood were closed in protest. Some 40 percent of the city's 7 million people are Muslim. 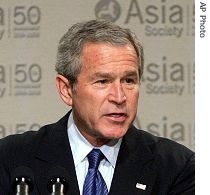 Heavily armed police and soldiers patrolled key intersections and public places as Bush arrived in Hyderabad , one of India 's burgeoning high-tech centers, on the second stop of his visit to India . Communist parties and Muslim groups called the rally to protest the Bush visit, which lasts for just a few hours before he returns to New Delhi .

The groups are upset with the growing ties between the two countries and the American presence in Iraq and Afghanistan . Still, Bush and the United States are more popular in India than most other countries. India topped a global survey on positive attitudes to the U.S. last year carried out by the U.S.-based Pew Research Center for the People & the Press, with 71 percent of Indians reporting a favorable perception of America .

While there have been numerous protests this week across India against Bush's three-day visit, with the crowds at some totaling tens of thousands of people, the numbers fell far short of the millions that organizers had threatened to bring to the streets ahead of the visit. In Hyderabad , protesters waving red and black banners marched three kilometers (2 miles) to a rally where they burned an effigy of Bush and conducted a mock funeral. "Allah is the superpower, not the United States " read many placards. Others carried posters of al-Qaida leader Osama bin Laden.

"We are protesting against George Bush because he is a warmonger. We are demanding the evacuation of American troops from Iraq ," said B.V. Raghavulu, a senior leader of the Communist Party of India (Marxist). Also Friday, about 100 youths on motorcycles rode through Srinagar , the summer capital of Indian-controlled Kashmir , a predominantly Muslim Himalayan region, protesting Bush's visit.

Riding though the streets, protesters chanted slogans: "Killer of Muslims go back," and carried banners saying, "Bush the biggest terrorist of the World." More than 67,000 people have been killed in Kashmir since the eruption of a separatist uprising in 1989 by Islamic militants who want to wrest the region from largely Hindu India.

The anti-Bush protest was accompanied by several dozen black-veiled Muslim women who marched through Srinagar protesting the publication of drawings of the Prophet Muhammad in European newspapers. They burned Danish and American flags and demanded the death of the cartoonists. Shops and businesses remained closed and traffic stayed off the roads Friday in Srinagar following a worldwide strike call by the Organization of Islamic Countries to protest the caricatures, reports the AP.