President Gloria Arroyo has lifted the state of emergency she declared exactly a week ago, convinced that security conditions in the country have normalized despite two explosions in a business district shortly before her announcement. 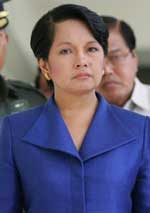 Investment analysts welcomed Arroyo's move, saying financial markets will be more at ease now that the government itself feels normalcy has been restored
a week after it uncovered and foiled an attempt by the president's enemies to grab power.

'She herself feels comfortable now and that should help ease pressure on the financial markets. Many investors had thought that the sooner (she ends the emergency rule), the better for the economy,' said David Cohen, director of Asian economic forecasting at Action Economics LLC in Singapore.

At the Philippine Dealing System, the peso rose to 51.13 against the US dollar in morning trade, a fresh high in three and a half years, even before Arroyo made the pronouncement.

"The lifting of the state of emergency should further boost investor confidence as it suggests that the security situation is now stable. The market is also convinced that the economic fundamentals remain strong,' said First Grade Holdings Inc managing director Astro del Castillo said.

Following her declaration of emergency rule, Arroyo said that 'numerous subversives, some soldiers and policemen have been arrested.'

She had accused disgruntled military officers of conspiring with communists and some elements of the political opposition to overthrow a legitimate government and sabotage the country's economic gains.

'After one week, we can say that we have thwarted this conspiracy and it is time for us to return to the proper work of society,' Arroyo told the nation in a televised address, reports the AP.