Iran 's top nuclear negotiator and key European foreign ministers sat down Friday for a new discussion of Tehran 's nuclear ambitions, with Europe determined to stick to its demand that Iran give up all uranium enrichment on its own soil. The Vienna talks come just three days before a meeting of the International Atomic Energy Agency's 35-nation board. The board put the U.S. Security Council on alert Feb. 4 after Iran refused to heed requests to reimpose a suspension on enrichment, which can make both nuclear fuel or the fissile material for warheads. 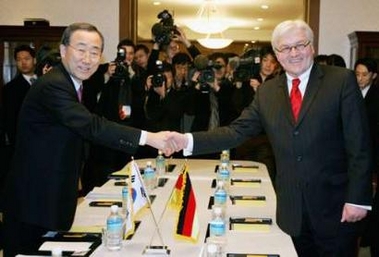 A diplomat, who spoke to The Associated Press on condition of anonymity because he was not authorized to discuss the issue, said Friday's meeting had been requested by Iran . He emphasized the Europeans would not compromise on their demand that Iran give up all uranium enrichment on home soil,a demand also contained in the IAEA resolution that reported Iran to the Security Council last month.

It was unclear if Iran was bringing new initiatives to the table. But a letter from the foreign ministers of France , Britain and Germany whose representatives were meeting Friday with Iran 's chief negotiator, Ali Larijani laid out European demands. For the meeting to be productive, the letter said, Iran must give a clear commitment to return immediately to "full and sustained suspension of all enrichment-related ... activity." The letter, dated Feb. 27 and shared in part with The Associated Press, also demanded that Iran recommit to allowing the IAEA pervasive, short-notice inspections of its nuclear activities. It withdrew such rights last month.

Diplomats said British Foreign Secretary Jack Straw would not attend as scheduled because he was running a high fever. Britain instead would be represented by a senior Foreign Office official, and France and Germany by their foreign ministers. EU foreign policy chief Javier Solana also was attending. Larijani and his team flew to Vienna from Moscow , where Russia tried to persuade Iran to accept its offer to enrich uranium for Iran . Before leaving he warned that handing over the nuclear issue to the U.N. Security Council as the United States has demanded would kill Moscow 's initiative.

A Russian nuclear agency official, who spoke on condition of anonymity because he was not authorized to speak to media, confirmed the Moscow talks had snagged over Iran 's refusal to freeze enrichment. The Russian plan backed by most in the international community including the U.S. and the Europeans is meant to deprive the Iranians of domestic control of all enrichment.

Iran restarted some enrichment activities last month, after voluntarily freezing the program during the talks with the Europeans that failed. IAEA Director General Mohamed ElBaradei welcomed Friday's EU-Iran meeting and urged all parties "to use this opportunity to create the necessary conditions to return to negotiations."

While the Security Council is waiting until the end of next week's board meeting to decide further action, its involvement reflects the level of concern surrounding Iran's nuclear ambitions. Tehran insists it wants enrichment only to generate electricity and that it does not seek nuclear arms, but a growing number of nations share U.S. fears that that is not the case. U.S. intelligence chief John Negroponte told lawmakers Wednesday in Washington that the risk of Iran 's acquiring nuclear arms and merging them with ballistic missile systems was "a reason for immediate concern."

Providing what he said Thursday were secret details of those missile programs, Iranian opposition figure Alireza Jafarzadeh told the AP that Iran had "significantly increased the production line" of its Shahab 3 missiles last year, and was now turning out 90 a year more than four times its previous production rate. The most advanced Shahab has a range of 1,900 kilometers (nearly 1,200 miles), he said. That is enough to target arch-foe Israel . There was no independent confirmation of the information, which Jafarzadeh said he received from sources inside Iran , reports the AP.