An apparent suicide car bomber drove into a vehicle outside the U.S. Consulate here Thursday, detonating a powerful blast that killed a U.S. diplomat and three other people, and wounded at least 50. 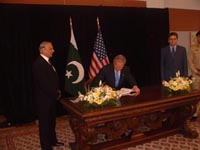 Officials said the bomb scattered wreckage several hundred feet and shattered windows in the consulate and a nearby luxury hotel.

The attack came one day before President Bush was scheduled to travel to Pakistan, following visits to Afghanistan and India. It underscored the fragile security situation in a Muslim country that Washington considers one of its closest and most important allies in the war on terrorism.

Bush, at a news conference Thursday in New Delhi, said the bombing in Karachi would not alter his travel plans, which include spending tonight in Pakistan.

"Terrorists and killers are not going to prevent me from going to Pakistan," said Bush, who offered "our country's deepest condolences" to the family of the slain U.S. diplomat, identified as David Foy, 52, of Fayetteville, N.C.

Pakistani authorities also were coping with new turmoil in a restive tribal region near the border with Afghanistan. Ethnic Pashtun tribesmen opened fire on Pakistani troops in retaliation for a military assault Wednesday on what authorities described as a training camp linked to al-Qaida. They said the attack killed 45 Islamic extremists.

The military assault, and the violent reaction by local civilians, highlighted a second set of problems for Pakistan's government, which is trying to prove its determination to crack down on locally based Islamic militants without antagonizing influential radical Muslim groups and inflaming independent tribal areas where extremists seek haven, reports Houston Chronicle.