Iran's top nuclear negotiator insisted Thursday that bilateral talks should continue on a Russian offer to enrich uranium for Iran, and warned that handing over the nuclear issue to the U.N. Security Council as the United States has demanded would kill Moscow's initiative. 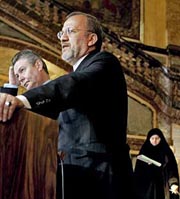 Larijani said his team had put forward a "package proposal" in Wednesday's talks in Moscow, denying that the discussions had ended in failure. "We need to give diplomats time to look at it," he said.

Russia has urged Iran to freeze its domestic uranium enrichment program as a condition for its offer to create a joint venture to enrich uranium for Tehran on Russian territory. But Larijani reaffirmed Tehran's refusal to give it up. The point was reinforced by Iranian President Mahmoud Ahmadinejad, who said during a visit to Malaysia that "it is very clear that we are not open to negotiating on our inalienable rights."

A Russian nuclear agency official, who spoke on condition of anonymity because he was not authorized to speak with the media, said the Moscow talks had snagged over Iran's refusal to return to a moratorium on enrichment.

"They are ready in principle to accept our proposal, but we don't want to discuss it separately" from the need for Iran to return to the moratorium, the official said, reports AP.

According to Financial Times, European Union foreign ministers will hold an unscheduled meeting with Iran on Friday, in an attempt to resume negotiations over Tehran’s nuclear programme before the file is sent to the United Nations Security Council.

“We want to show other countries that we are willing to work towards diplomatic solutions,” said an EU diplomat. “But I don’t have any great expectations of a breakthrough.”

The EU3 froze dialogue with Iran in January after it broke a 2-1/2-year moratorium on enrichment activity.

IAEA director-general Mohamed ElBaradei, who is also due to meet the foreign ministers, also welcomed the EU3-Iran meeting.

"As negotiations proceed, it will be essential for all parties to specifically address the security, political and economic issues that underlie any future comprehensive settlement," he said in a statement.

ElBaradei is concerned that involving the Security Council may drive Iran into a corner and lead to deadlock, given that veto-wielding Russia and China reject sanctions.

"Only through these two tracks -- full transparency on the part of Iran and negotiations with all concerned parties -- can confidence be established regarding the nature of Iran's nuclear programme and a durable solution be found," ElBaradei said, informs Reuters.