Opponents of Canada 's seal hunt have a powerful ally in their bid to end the annual slaughter: Paul McCartney, who has pledged to take to the ice floes and frolic with the doe-eyed pups before the harvest gets under way. 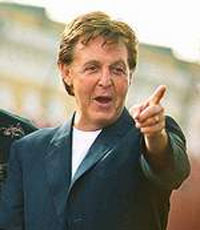 The former Beatle and his wife, Heather Mills McCartney, arrived Wednesday night in this small fishing community on Canada 's Atlantic coast and intend to land a helicopter on the ice in the Gulf of St. Lawrence on Thursday if weather permits.

The longtime animal-rights activists want to publicize the plight of the fluffy white pups, which are calved and weaned from their mothers on the frigid ice before being clubbed to death.

"Previous Canadian governments have allowed this heartbreaking hunt to continue despite the fact that majority of its citizens as well as those in Europe and America are opposed to it," the McCartneys said in a joint statement Thursday morning. "We have complete faith that Prime Minister Harper will take swift and decisive actions to end the slaughter of these defenseless seal pups for good."

The United States has banned Canadian seal products since 1972 and the European Union banned the white pelts of baby seals in 1983.

The British government is also considering banning the import of seal goods. Groups such as Respect for Animals and the Humane Society of the United States , which are coordinating the McCartneys' visit, are encouraging people to boycott Canadian seafood as a show of solidarity.

"I think the McCartneys are two of the most visible people in the world, and with them drawing attention to the fact that this hunt is still going on, this is going to get that message out across the world," said Rebecca Aldworth, who will be observing and documenting her seventh seal hunt for the Humane Society.

Aldworth said the McCartneys quizzed her long and hard about the annual harvest, including the economic benefits that sealing brings to the local fishermen, whose livelihoods were devastated when the Atlantic Ocean cod stocks dried up in the mid 1990s.

"I've observed the seal hunt at close range for seven years. I've routinely witnessed conscious seals dragged across the ice with boat hooks, wounded seals left to choke on their own blood, and seals being skinned alive," Aldworth said in a statement. "The commercial seal hunt is inherently cruel, it is a national disgrace."

The Canadian government endorses the harvest as a cultural right for many Maritimers and announced a hunting management plan in 2003 with a quota of 975,000 seals over three years.

About 325,000 seal pups were killed during the hunt last year, bringing the local fishermen $14.5 million (12.1 million euros) in supplemental income, which they say their families badly need during the winter offseason.

The dates for the spring leg of the hunt have yet to be announced as the unseasonably mild temperatures in northeastern Canada have made the ice thin.

Federal Fisheries Minister Loyola Hearn said Canada would not terminate the annual hunt and insisted it is the most regulated mammal harvest in the world. The government says the country's seal population is abundant, estimating there are 5 million harp seals.

"I would encourage Mr. McCartney when he comes here to see the effect this is having on the economy and to realize this is sustaining people in their home communities," Hearn said.

Aboriginal and Inuit subsistence and commercial hunters begin the kill Nov. 15 in Canada 's vast expanse of frozen northern waters. The spring leg of the commercial hunt starts in the Gulf of St. Lawrence and then moves to the Atlantic Ocean about 30-40 miles (50-65 kilometers) away from Newfoundland.

Harp seals have been hunted commercially off Newfoundland since the early 1700s. They were first harvested for their oil, but now are culled mostly for their pelts, sold mostly for the fashion industry in Norway , China and Russia , reports the AP.